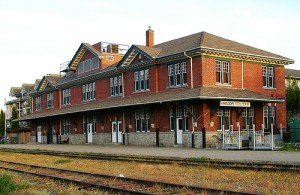 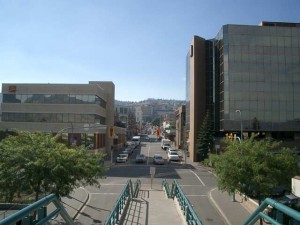 The name Kamloops refers to the flowing together of the north and south Thompson rivers named by the Secwepemc Indian Band or Shuswap people. The discovery of gold brought many adventurers into the region in the late 1850’s. Once B.C. became a part of Canada in 1871, Kamloops received their first trans continential railroad in 1886. The first South Thompson bridge was built in 1887, to be followed by one to North Kamloops in 1901.

Kamloops was incorporated in 1893 with a population of less than 1,000 people. Numerous industries such as Royalite Refinery opened in 1955, Kamloops Pulp and Paper Mill (now Domtar) was established in 1964 and in 1977 Afton Mines and Smelter commenced operations. 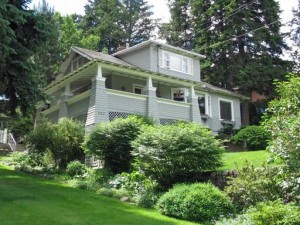 The downtown area of Kamloops is known to have a number of heritage homes of all sizes. The furthest westerly area of South Kamloops and the south eastern area have mature homes but not heritage homes. 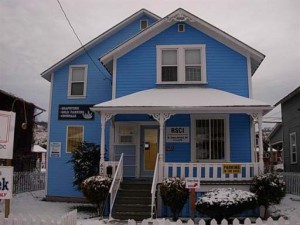 A number of residential units exist within the downtown core. There are many apartment units (newer and older) that are very close to downtown conveniences. Single family homes are scattered throughout the downtown core and are often converted into commercial space. Many heritage style homes along Seymour Street east of 6th are used for commercial space. A number of professional offices and health related services are located here. South of Seymour there are some nice residential streets such as St Paul Street, Nicola Street and Battle Street. Battle does have a couple of commercial practices but for the most part is residential.

Buyers will find the majority of single family homes east of 6th Avenue. The homes in this part of South Kamloops are mostly smaller residential homes often under or just over 2,000 square feet. 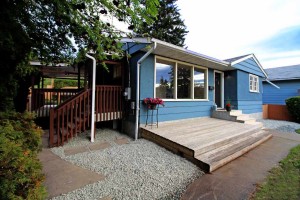 South east of the Kamloops downtown area is a nice neighbourhood that is home to a number of families because of the close proximity to elementary and secondary schools. This area of South Kamloops sits south of Columbia street, north of the trans Canada Highway #1, west of 13th Avenue and east of 6th Avenue. Dominion Street, Pine Street, Pleasant Street, Munro Street, Fraser Street and Douglas Street are all popular residential streets in the area. Most homes in this area are older and typically built between 1950 to 1980’s with some random newer construction homes within the neighbourhood. Many owners have chosen to upgrade and renovate their homes in this area with many significant renovations being completed. The character of many of the homes has been preserved which adds to the character of this neighbourhood.

There are a number of playgrounds and parks in this area of South Kamloops. Access to the Peterson Creek hiking trails also is close by. The Sagebrush Theatre is also located in this neighbourhood. 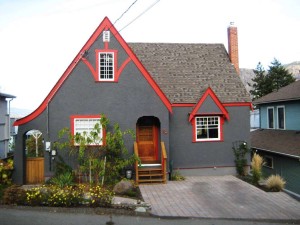 South Kamloops west also known as the West End has a variety of real estate. Seymour Street West, Battle Street West, St. Paul Street West, Nicola Street West, Clark Street, Connaught Street, Nicola Wagon Road and Lee Street have a number of heritage homes that are often over 2,000 square feet in size. This region is fairly sloped and the yard sizes vary with each property because of the changing incline.

At the top of Battle Street West where it meets Strathcona Terrace the neighbourhood is very different from the one just east. The homes in this area are mature (1950’s to 1980’s) but not heritage homes. There are also a few newer homes scattered throughout this area. Grandview Terrace, Dufferin Terrace, Hemlock Street, Lombard Street, Arbutus Street, Powers Road, Sequoia Place, Centre Avenue, Boundary Road, Chaparral Place and Strathcona terrace all make up this neighbourhood. Many of these homes have beautiful views of the Thompson valley.

Further west along Lombard street leads to another small neighbourhood where there are a few single family homes, a number of town house units and half duplex units. Hudson Bay Trail has a number of higher end town houses that overlook the Thompson river. 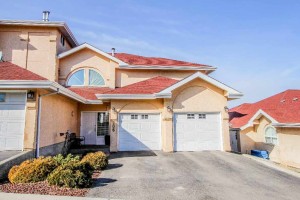 Mission Hill is a condo building located in this area and consists of one and two bedroom units with beautiful river views. Hudsons Bay Pointe is the newest townhouse complex located on Hudsons Bay Trail and Fernie Drive. There are many options for buyers in this area. Schools are not walking distance for children in this area. 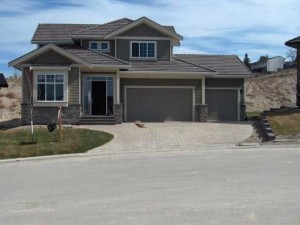 Further west, Guerin Creek Estates is a newer high end development in South Kamloops just off of Summit Drive. Many of the homes have high end finishing and appliances. The homes in this community are executive sized homes with larger square footages and often three car garages. Current homes in Guerin Creek are two level designs with a basement, rancher style with a basement or basement entry homes. The lot sizes do vary but are executive sized lots.  Many of these homes have amazing views of the Thompson River Valley looking north.

The newest area of development in the South Kamloops area is Hudson’s Ridge which is located west of Summit Drive, across from Guerin Creek Estates. 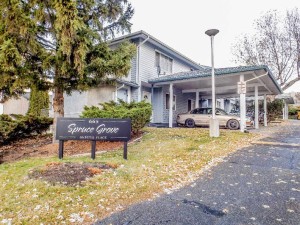 One other area that is west of the downtown core is the Dalgleish area. Sitting above Grandview Terrace, Dalgleish Drive has a variety of multi-family residences. Apartment buildings and townhouses often are home to students attending Thompson Rivers University. Many of the homes off of Dalgleish have great views of the Thompson Valley. There is often a lot of variety of units to choose from in this area. Often investors buy properties in this area as it does tend to rent for the most due to the close proximity to TRU. Not every development in this area allows rentals so it is important if you are an investor to ensure there are not any rental restrictions. 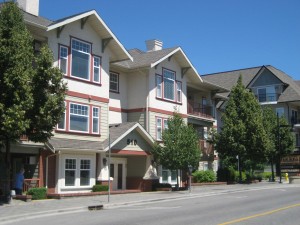 Condominium units can be found on a number of streets in the Downtown core. Victoria Landing is the highest building in the Downtown area. This complex is located on Victoria at 6th Avenue. Lorne Street has a number of condo buildings. Buildings on Lorne have covered parking in secure garages. Park Place is a complex on Lorne Street with numerous amenities such as indoor pool, sauna, gym, community room and boat moorage. All of the units located on Lorne Street are steps to the Rivers Trail and a short walk to Riverside Park. 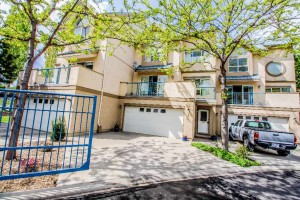 There are a few townhouse developments as well in the South Kamloops area. Townhouses can be found on Nicola Street at 6th Avenue, Nicola at 1st Avenue, on 1st Avenue, in Park Place on Lorne Street at 9th, St Paul Street at 1st Avenue, Hudsons Bay Trail and in the Dalgleish area near the university. These units all range in age and size. 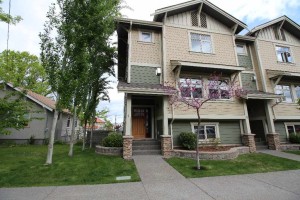 There are also a number of 55+ buildings in the South Kamloops area. Click here to review these properties.

South Kamloops covers a large area of the city and has many different neighbourhoods. There are always a number of homes for sale in South Kamloops. For buyers on a budget to buyers looking for high end properties, there is a home for each and every budget.

Click here to view properties for sale in South Kamloops

There are also a variety of small and medium retailers, numerous restaurants, and fast food establishments. Victoria Street is the main street where many clothing boutiques, bridal stores and specialty stores are found. South Kamloops is home to the Royal Inland Hospital, the only hospital servicing the Kamloops (and Thompson) region.

Downtown Kamloops covers the region between Columbia Street down to the Thompson River and from just west of 1st Avenue to 7th Avenue. The majority of professional offices and downtown businesses are found on Lansdowne Street, Victoria Street, Seymour Street and St. Paul Street. Battle Street, Nicola Street and Columbia Street do have some businesses but these streets are not as heavily populated by businesses as the previously mentioned streets.

The Kamloops Farmers Market is located in the Downtown core. The Farmers Market takes place between April and October. There is a farmers market on both Wednesdays (400 Block of Victoria Street) and Saturdays (200 Block of St Paul Street).

Shopping areas in Sahali, Southgate and Aberdeen are within a five to ten minute drive of South Kamloops. Many of the big box stores are located in these areas.

Thompson Rivers University is located in the Southgate/Sahali area. The campus is positioned at the intersection of Summit Drive and McGill Road. TRU is a fully accredited University and offers a variety of programs and courses to students in many different areas of study. South Kamloops boarders the Southgate area and TRU it is often a very popular area for University students to live due to the close proximity to the University. 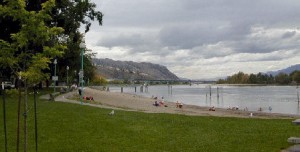 Riverside Park and Interior Savings Centre are both located on Lorne Street in South Kamloops. Riverside park is a large park on the river with a water park, a sandy beach area, large open green space for summer activities, washroom facilities and picnic areas. Riverside park also has a stage where numerous performances and events occur during the warmer months.

Sandman Centre is home to the Kamloops Blazers Junior Hockey team. Many performances and concerts also occur at this large facility. 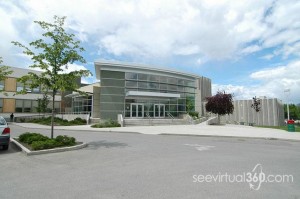 South Kamloops Secondary is also the home to the Sagebrush Theatre, a 706 seat proscenium theatre is located on 9th Avenue in South Kamloops (south of Columbia Street).

The Kamloops YMCA/YWCA is located on 4th Avenue and Battle Street in the Downtown core. The facility offers an indoor pool, sauna, hot tub, exercise facilities and many fitness classes.

Peterson Creek Park runs through most of Sahali and part of South Kamloops. This is a 423 hectare park that is a natural creek corridor. There are over 30 kilometers of trails in the park and many sites to enjoy including panoramic valley views and Bridal Veil Falls. There are numerous access points and the park is equipped with picnic tables and grassy areas to enjoy.

Tournament Capital Centre is located in the Sahali/Southgate area which is only a five to 10 minute drive from any South Kamloops neighbourhood. TCC has many different facilities all in one building such as gymnastics, swimming, indoor track, fitness facility, courts and much more. There are also a number of sports fields that surround the facility.

There are tons of playgrounds, parks and playing fields in the South Kamloops area. Click here to see Kamloops parks on a map.

South Kamloops is serviced by BC Transit buses on a frequent and regular schedule. Click here to view the BC Transit website. The main bus loop is located on Lansdowne Street at 7th Avenue.

Access to Trans Canada Highway #1 is very easy from any area of South Kamloops with usually approximately a 5 minute drive to the onramp.

The Kamloops Airport is located north west 15 to 20 minutes from South Kamloops.