Pace of housing starts slows in October, says Canada Mortgage and Housing Corp. This article appeared on CTV.ca on November 10th, 2014 and was written by The Canadian Press. 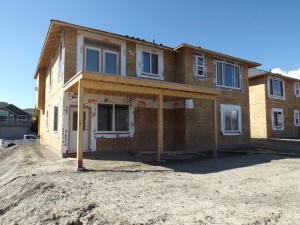 OTTAWA — The pace of new home starts in Canada slowed in October due to less construction of multiple-unit homes including condominiums, Canada Mortgage and Housing Corp. says.

The agency estimated Monday the standalone monthly seasonally adjusted annual rate was 183,604 units in October, down from 197,355 the previous month.

Economists had expected a rate of 200,000, according to Thomson Reuters.

The decrease in October brought the six-month moving average down to 195,707 homes as of October, compared with 197,763 in September.

“The decrease in the trend reflects a decline, in October, of starts of multi-unit dwellings, including condominiums,” CMHC chief economist Bob Dugan said in a statement.

“Given the elevated level of condominium units under construction, our expectation is that condominium starts will continue to trend lower over the coming months.”

CMHC says the pace of urban housing starts in October decreased across the country, with declines led by British Columbia and followed by Quebec, Atlantic Canada, the Prairies and Ontario.

The overall drop in the pace of new home construction came as the rate of urban starts slowed to 164,683 in October, down from 177,053 in September.

TD Bank economist Brian DePratto noted that while the October results fell short of expectations, the trend over the last six months has still outperformed the bank’s expectations and has remained well above the 180,000 level needed to keep up with underlying population growth.

“In addition, the decline was led entirely by multiple-unit starts, which can be quite volatile,” DePratto wrote in a note to clients.

“With multi-unit construction growing as a share of overall new homebuilding (it now accounts for 60% of construction), monthly swings have become more volatile, and so longer-term trends provide a more appropriate gauge of the health of Canada’s construction industry.”