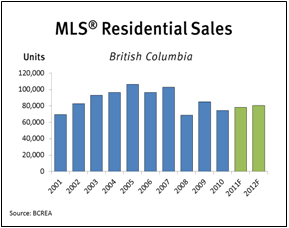 “Low mortgage interest rates are expected to persist through 2012 keeping affordability on an even keel,” said Cameron Muir, BCREA Chief Economist. “However, headwinds on the economic front will constrain consumer demand over the next year to below the ten-year average of 87,600 units.” A record 106,300 MLS® residential sales were recorded in 2005.

“Moderate consumer demand combined with larger inventories of homes for sale means BC housing markets will experience little upward pressure on home prices through 2012,” added Muir. The average MLS® residential price in the province is estimated to rise 11.8 per cent to $564,600 this year, and is forecast to decline 2.5 per cent to $550,500 in 2012.