The Fixed vs.Variable Conundrum, What Mortgage Is Best For You

This article was written by Rob McLister of CanadaMortgageTrends.com on September 16, 2011.

To get anywhere, or even to live a long time, a person has to guess, and guess right, over and over again, without enough data for a logical answer.” — Robert Heinlein

Mortgage rates are doing things that few people expected one year ago. Variable discounts have been sliced in half and those cunning banks are persuading us to pay disproportionately high fixed rates despite near-record-low funding costs.

Mortgage shoppers trying to pick a term might find all this uncertainty paralyzing. So what do you do when you don’t know what to do? You take your best educated guess.

There is never enough data to make perfectly optimal mortgage decisions. You’d need a really powerful time machine for that. But understanding the true risks of each term can improve your lot substantially.

On that note, we’ve compiled a fairly comprehensive list of pro-variable-rate and pro-fixed-rate arguments below. At the very bottom, we try to boil it all down.

1.  Statistics, Statistics: 77% of the time, variable wins—historically speaking. That’s according to the usual widely-quoted mortgage research. (This conclusion is based on fully discounted rates.) BMO says variables have been cheaper 83% of the time, but we’re not sure what assumptions they used.
2. Lower Penalties: People often break their mortgages early, for various reasons (including refinancing, selling, divorce, moving to a mortgage with a better rate/more flexibility, etc.). The average duration of a 5-year variable is about 3.3 years according to bank sources. Most variables let you escape your contract with a 3-month interest penalty, whereas fixed rates can hit you hard with interest rate differential (IRD)—even if rates stay relatively flat (many people don’t know that). “Everyone I know that’s mad about their mortgage attributes it to IRD,” says Peter Majthenyi, one of Canada’s highest volume brokers.
3. Less Rate Risk: Compared to prior economic recoveries, economists believe that it won’t take as many rate hikes to cool Canada’s overleveraged slow-growth economy this time around. A 3% policy rate may do the trick today, whereas it’s taken a 4.20%+ rate (on average) to bring the economy and inflation to equilibrium in the past (see: neutral policy rate). If true, a 3% key lending rate implies a 5% prime rate over the next five years. That’s a quite tolerable 2% higher than today.
4.  Slower Rate Hikes: CIBC economist Benjamin Tal says: “We know the five-year (fixed) rate is attractive, but we also know short-term rates are not [rising].” The U.S. Fed has pledged to remain on hold till 2013. Moreover, TD says: “The Bank of Canada has repeatedly noted that there are limits to how much Canadian short-term rates can diverge from those in the United States.” Here’s an associated factoid: Since 1996, when the BoC started adjusting rates in 25 bps increments, rate-increase campaigns have lasted an average of 14.6 months, during which time rates increased an average of 170 bps. Of course, by definition, each rate-increase cycle was followed by a plateau, and then a rate decrease cycle.
5. A Free Option: Variables let you lock in anytime for free. Majthenyi is a big proponent of variables largely for this reason. “If you have huge vacillations in rates and you want to take advantage of those (i.e., lock in if rates drop further, or lock in if rates look like they’ll blast off), you can do it for free in VRM…but not in a fixed.” Being able to renegotiate sooner appeals to Majthenyi, and he applies that logic to shorter fixed terms as well. Even if a 4-year fixed had the same rate as a 2-year fixed for example, he says: “I’d rather come up for renewal sooner so I’d take the 2-year over the 4-year hands down.”
6.  Fixed Payments: Some lenders let you fix your payments so that they don’t move when prime rate moves. Fixed payments, therefore, provide some peace of mind when rates start climbing. The exception is if prime skyrockets and your “trigger rate” is hit (i.e., rates jump so high that you’re not covering all your monthly interest). In that case, your payments will generally be adjusted higher.
7.  Payment Matching: When variable rates are lower than fixed rates, you can increase your variable payments to match a 5-year fixed payment. That whittles down principal faster and cuts your interest paid (not interest rate) by perhaps three-quarters of one percent over five years. For example, if you pay $50,000 of interest over five years on a $300,000 mortgage, this strategy might save you something like $350-$400 in a slow rising rate environment. It’s not as much savings as some advocates of this strategy make it sound, but it’s definitely something. (Note: The precise savings depends on your mortgage terms, rate trends, etc. We’ve made certain assumptions including: a 25-year amortization, a prime – 0.50% rate vs a 2.99% four-year fixed, 100 bps of rate hikes starting Dec. 2012, 100 bps more starting Dec. 2013.)
8.  Timing is Futile: Even if you had the ability to predict rates one year ahead of time, it wouldn’t help. That’s what Prof. Moshe Milevsky found in a 2008 study (See “Locking In” on page seven of this.) The problem is, knowing short-term rates doesn’t help you predict long-term rates, and the majority of mortgages are 3+ years. In the past, short-term rates have often surged, only to fall back within 18-24 months. People who lock in on the way up frequently lose out as a result. Associated fact:  In the four previous rate cycles, rates reversed lower within 4 months (on average) from the last rate hike.

1. Research Bias: Historical research clearly e4. Abnormally Low Yields:stablishes that variable rates have had an edge, but past performance does not foretell the future. Rates have fallen steadily since 1981. By definition, variable mortgages can’t help but outperform with that kind of trend.
2. Cheap Insurance: The difference between today’s variable rates (prime – 0.45% on the street) and good fixed rates (e.g., 2.99% for a 4-year) is remarkably tight at 44 basis points. That “safety premium” is the equivalent of less than two Bank of Canada rate hikes. Knowing that you won’t get skewered by escalating rates is worth something.
3. Economic Lows: It’s somewhat debatable, but one could assume that we’re somewhere near the bottom of an economic cycle. If so, rates will ascend as the economy makes a comeback. RBC writes: “Our assessment is that the market has become too pessimistic on the growth outlook and that the economy will re-accelerate, resulting in steadily rising rates during 2012.” Adds BMO: “Considering the likely upward trend in interest rates, this may be one of those rare periods when a fixed rate turns out to be the superior choice.” (If you think banks have a fixed-rate bias and that statement makes you cynical, we can’t blame you.)
4. Abnormally Low Yields: Fixed rates are at generational lows, largely for temporary reasons (like the safe-haven bond buying that’s driving down yields). Remember, bond yields lead fixed mortgage rates. Could yields go lower? Yes. Will they stay that low? Many think not. 1.40%-1.50% is a meagre reward for loaning the government money for five years—however safe it may be. Mind you, people said the same thing about Japanese bonds (exceptions to economic “rules”  never cease).
5. Certainty: Not having to monitor and time the market means one less thing to worry about in life. If you intend on locking in your variable down the road, you’ll need to be exceptionally accurate with your timing. People who are that prescient may be better off quitting their jobs to manage a hedge fund.
6. Fixed Demand: When the BoC starts tightening next, some think fixed mortgage rates could shoot up faster than normal. According to John Bordignon of Paradigm Quest, there is as much as $350 billion worth of variable-rate mortgages at the moment. “This is probably the highest level (of outstanding VRMs) we have seen in the Canadian mortgage market.” If there were a flood of variable-to-fixed conversions in any given quarter, and demand for fixed rates doubled in that quarter, “There is just not enough 5-year money out there,” he says. June 2010 provided a small taste of what could happen. “Fixed-rate cost spiked 60 basis points. Merix (a prominent non-bank lender) experienced four times the number of conversions as normal. People panic.” This, of course, increases the risk of locking at a bad rate.
7. Qualification: High-ratio borrowers cannot always qualify for a variable rate. That’s because lenders approve you based on your ability to make much higher payments (See: qualification rate). But don’t despair, you can always get a fixed-rate today and then go variable at renewal. In fact, when you renew you may not even have to qualify at a higher rate. (Default insurers don’t require requalification on renewal, assuming you’ve paid your mortgage as agreed. That is subject to your lender’s own policies of course.)
8. Costly Conversion: Variables are sold with the benefit of being able to convert to a fixed rate anytime. But that entails “slippage.” In other words, the fixed rate you’ll get when converting is worse than the rate you may expect. Some banks’ conversion rates are as high as posted – 1%. Meanwhile, those same banks give new customers posted – 1.50%. Never expect a great rate when locking in a variable to a fixed. You’ll get an okay rate, even a decent rate if you’re really lucky, but never a great rate. That slippage multiplied by several months can boost borrowing cost materially.
9. Assumptions Favour Fixed: When making decisions in uncertainty, you’re forced to make assumptions. If you’re a bearish mortgage analyst, you might assume:
Prime rate will stay as is until April 2013 (near when the U.S. Fed’s conditional rate-hold pledge expires)
Rates will then rise 150+ bps in the next 1.5 years.

In this scenario, a 2.99% four-year fixed costs less than a variable over five years, other things being equal (including payment matching for equal monthly payments). 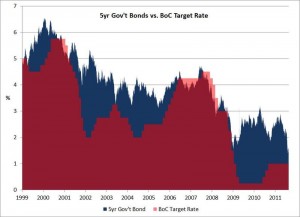 Term selection relies on so many things:

The above conclusions and five years of research have convinced us of one thing. It’s a Vegas-style gamble to select a variable-rate mortgage with intentions of locking in “at the right time.”

You’re better off either:

a) Going variable and staying variable (barring a personal/financial crisis that would necessitate locking in).

c) Going half fixed and half variable (In that case, you’ll never be more than half wrong.)

Keep in mind, there are lots of fixed terms besides the age-old 5-year. The sweet spot today—assuming economist rate forecasts are remotely accurate—is a 4-year fixed under 3%. You’ll find this through approved Street Capital and Industrial Alliance brokers, among other places (no telling how long that rate will last).

Qualified borrowers should also consider Scotia’s 2-year special. It has a tantalizing fixed rate of 2.49%, which is below most variables on the market.

Whatever you pick, the good news is this. The cost of choosing the wrong term has probably never been lower. Fixed-variable spreads are tight as a vice, money is almost as cheap as ever, and expectations are that long-term rates will stay “lower for longer.” (Economists seem to love that buzzphrase.)