Ottawa, ON, December 15, 2014 – The Canadian Real Estate Association (CREA) has updated its forecast for home sales activity via the Multiple Listing Service® (MLS®) Systems of Canadian real estate Boards and Associations for 2014 and 2015.

With mortgage rates remaining at historic lows since the summer, activity has remained stronger for longer than previously expected and has yet to show clear signs of fading.

As a result, the forecast for annual sales in 2014 and 2015 has been upwardly revised. Almost all of the upward revision to national activity in both years stems from the current strength and momentum of sales across most of British Columbia and much of Ontario, particularly in the Greater Golden Horseshoe region.

In British Columbia, historically low mortgage interest rates have helped fuel a broadly based increase in the number of homes changing hands this year, although activity has only recently risen above its 10-year average. In Ontario, strong demand has been met with a rise in listings, which in recent years had been in shorter supply. The recent momentum for sales in both cases has endured for longer than expected and has shown few signs of diminishing. These two provinces together account for more than half of national activity and are responsible for much of the upward revision to projected and forecast national sales.

Sales are now projected to reach 481,300 units in 2014, representing an annual increase of 5.1 per cent. While this places annual activity eight per cent below the record set in 2007, it marks the strongest annual sales since then.

British Columbia is projected to post the largest annual increase in activity (14.5 per cent) followed closely by Alberta (9.3 per cent). Demand in both of these provinces is currently running at multi-year highs. Annual activity in Ontario is also expected to come in 3.6 per cent above 2013 levels.

Sales in Saskatchewan (+1.8 per cent), Manitoba (+0.8 per cent), Quebec (-0.1 per cent), New Brunswick (-0.8 per cent), and Prince Edward Island (no change) are expected to hold near 2013 levels. Activity in Nova Scotia and in Newfoundland and Labrador is projected to decline this year by 3.9 per cent and 4.7 per cent respectively.

In 2015, Canadian exports, job growth and incomes are expected to improve with mortgage interest rates edging only slightly higher. These opposing factors should benefit sales activity in housing markets where demand has been softer and prices have remained more affordable. Sales in relatively less affordable housing markets are expected to be more sensitive to higher mortgage interest rates.

National activity is now forecast to reach 485,200 units in 2015, representing a year-over-year increase of 0.8 per cent. While sales nationally are still expected to peak this year and trend lower throughout 2015, they are not expected to return to weakened levels recorded in the first quarter of 2014.

There are a number of upside and downside risks to the forecast. In British Columbia and Ontario, activity is still expected to be held in check by eroding affordability for single family homes. However, with sales in British Columbia now only at average levels, they may climb further before rising interest rates begins to materially reduce affordability. Sales in Ontario may also remain stronger than expected should new listings continue to come onto the market at higher levels in places and in market segments where a lack of supply in recent years has led to pent-up demand.

Additionally, consumer confidence and job growth in the Prairies may come under downward pressure depending on how far oil and non-energy commodity prices decline and on how long they remain low.

The national average price has evolved largely as expected since the spring, resulting in little change to CREA’s previous two forecasts.

The national average home price is now projected to rise by six per cent to $405,500 in 2014, with similar percentage price gains in British Columbia, Alberta, and Ontario. Saskatchewan and Manitoba are expected to post increases of close to three per cent. Newfoundland and Labrador and Prince Edward Island are forecast to see average home prices rise by a little over one per cent this year, while Quebec is forecast to see an increase of slightly below one per cent. Prices are forecast to recede by about half a per cent in New Brunswick and Nova Scotia. 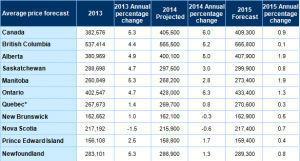 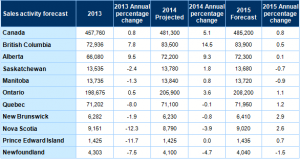 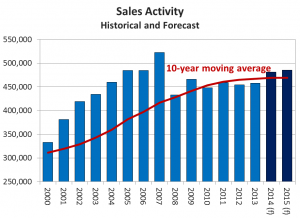