Ottawa, ON, February 17, 2015 – According to statistics released today by The Canadian Real Estate Association (CREA), national home sales activity was down on a month-over-month basis in January 2015.

The number of home sales processed through the MLS® Systems of Canadian real estate Boards and Associations fell 3.1 per cent in January 2015 compared to December 2014.

January sales were down from the previous month in about 60 per cent of all local housing markets. On a provincial basis, the monthly decline largely reflected fewer sales in Alberta and Saskatchewan. 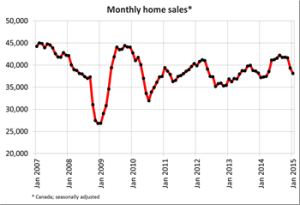 “As expected, consumer confidence in the Prairies has declined and moved a number of potential homebuyers to the sidelines as a result,” said CREA President Beth Crosbie. “By contrast, housing market trends in the Maritimes are continuing to improve, which underscores the fact that all real estate is local. Nobody knows this better than your local REALTOR®, who remains your best source for information about the housing market where you currently live or might like to in the future.”

“Comparing sales activity for January this year to sales one year earlier, there was a fairly even split between the number of markets where sales were up versus the number of markets where sales were down,” said Gregory Klump, CREA’s Chief Economist. “The decline in national sales largely reflects weakened activity in Calgary and Edmonton. If these two markets are removed from national totals, combined sales activity remained 1.9 per cent above year-ago levels.”

The number of newly listed homes rose 0.7 per cent in January compared to December. New supply climbed higher in just over half of all local markets, led by Edmonton and Greater Toronto. By contrast, Greater Vancouver, Calgary, and Regina posted the largest monthly declines in new listings.

The national sales-to-new listings ratio was 49.7 per cent in January, marking the first time this measure of market balance has dipped below 50 per cent since December 2012. 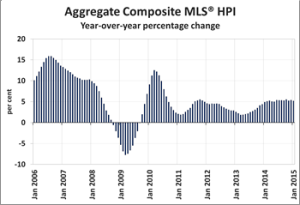 A sales-to-new listings ratio between 40 and 60 per cent is generally consistent with balanced housing market conditions, with readings above and below this range indicating sellers’ and buyers’ markets, respectively. The ratio was within this range in more than half of all local markets in January.

There were 6.5 months of inventory nationally at the end of January 2015, its highest reading since April 2013. As with the sales-to-new listings ratio, the reading for the number of months of inventory still indicates that the national market remains balanced.

The Aggregate Composite MLS® HPI rose by 5.17 per cent on a year-over-year basis in January. This continues the trend, in place throughout 2014, where year-over-year price gains held steady between five and five-and-a-half per cent.

Price gains varied among housing markets tracked by the index. As in recent months, Calgary (+7.76 per cent), Greater Toronto (+7.47 per cent), and Greater Vancouver (+5.53 per cent) continued to post the biggest year-over-year increases.

That said, while prices in Greater Vancouver and Greater Toronto continue to trend higher, the trend for prices in Calgary has been fairly stable since last summer while year-over-year gains continue to shrink.

The MLS® Home Price Index (MLS® HPI) provides a better gauge of price trends than is possible using averages because it is not affected by changes in the mix of sales activity the way that average price is.

The actual (not seasonally adjusted) national average price for homes sold in January 2015 was $401,143. This represents an increase of 3.1 per cent year-over-year and the smallest increase since April 2013.

The national average home price remains skewed by sales activity in Greater Vancouver and Greater Toronto, which are among Canada’s most active and expensive housing markets. Excluding these two markets from the calculation, the average price is a relatively more modest $312,280, which represents a year-over-year decline of three tenths of one per cent.

These two charts came from the Hufington Post on February 17th, 2015. 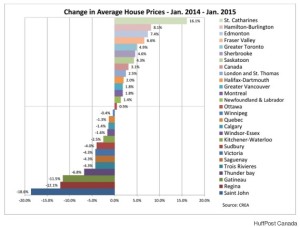 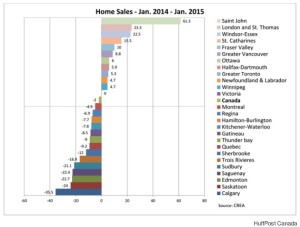