This article appeared on Kamloops This Week‘s website on January 4th, 2016 and was written by Cam Fortems.

Valleyview and Barnhartvale led city neighbourhoods in a 2015 assessment marked by continued moderate growth for Kamloops and the region.

Homeowners will tear open their assessment letters arriving in the mail this week — or check online — to find values in the range of minus five per cent to plus 10 per cent. Most neighbourhoods saw property values increase in the range of two or three per cent.

“For the most part, values are fairly constant,” said area assessor Graham Held. “Graphically. you can see the vast majority are in the zero to five per cent range [of increase].”

The City of Kamloops uses the calculations as part its annual tax assessment.

The city’s revenue manager, Parissa Bhullar, said a precise average is not yet available. That average will determine whether property owners will get a break or pay higher property taxes in 2016.

On a neighbourhood basis, Barnhartvale homeowners saw the biggest average increase — at $24,000, or about 6.5 per cent. That compares to lower increases in Juniper Ridge, Westmount and Batchelor Heights, where values are up a half per cent or less.

The city also saw about $382 million in new construction for the period between July 2014 and July 2015. Held said the higher volume of sales recorded this year helps with valuations. “Sales values were strong, which is good for us because everything is based on sales,” he said.

Held said property owners who believe there is an error or that their values are misrepresented should call B.C. Assessment Authority for a potential correction or to book a time for an appeal with the property assessment review panel.

The deadline to file an appeal is Feb. 1.

Based on moderate increases, Held said call volumes to the office, as well as appeals, are expected to be down.

Across the region, Chase and Sun Peaks saw the highest average increases — as much as 15 per cent  — with Logan Lake and the North Thompson among the lowest.

While real-estate sales cooled in December, the year 2015 marked an active real estate market in Kamloops.

Kamloops & District Real Estate Association recorded a 14 per cent increase in unit sales for the year, to reach almost 2,600 units. For December, typically one of the slowest months of the year, the market saw a nine per cent decrease in units sold.

Prices remain moderate, with the median price for a single-family home in Kamloops reaching $375,000. That monthly number can fluctuate widely due to the small monthly sample size. In November, the median price was $393,000.

For the year, the most active neighbourhood for sales was Brocklehurst, followed by Aberdeen and Sahali.

Assessment Notices Will Not Shock Kamloops Homeowners, Kamloops This Week

This article appeared in the Kamloops This Week on November 30th, 2015 and was written by Cam Fortems.

Kamloops should escape the price shock homeowners in many parts of the province will experience when they tear open assessment notices next month.

Area deputy assessor Graham Held said yesterday that, while real-estate sales volumes in the Thompson region remain healthy, the market is not seeing the wild price increases found in the Lower Mainland.

“We’re looking at another flat market this year, a marginal increase,” Held said of assessment valuations.

Property owners across B.C. receive assessment notices in the first week of January. Those notices reflect property values as of July 1 the previous year.

“We’re incredibly different than the rest of the province,” she said.

“It seems every time I have a conference call [with other real-estate association presidents], we’re the anomaly.

“Everyone else has a roller-coaster market. Kamloops is really stable.”

Assessment increases last year ranged from zero to about 10 per cent in some areas of the city.

Held said this year’s assessment is expected to continue that trend of price stability.

Some markets, including Vancouver Island and the Okanagan, have seen ripples from Greater Vancouver, where prices for single-family homes are up in the range of 20 per cent in some areas.

“It gets to the point were you don’t know what to advise your client, it’s so crazy.”
Property purchase tax relief?

Kamloops-area realtors are hoping the province will bring relief to local buyers from the property purchase tax (PPT) in the coming budget.

The B.C. Liberal government has mulled changes to the PPT, in part to cool the high end of the overheated Vancouver housing market.

Suggestions by Finance Minister Mike de Jong have included increasing that tax on homes above a certain value and giving relief on the lower end.

“For young buyers buying a second home . . . that could add up to $6,000 or $8,000 said Cyndi Crossley, president of Kamloops & District Real Estate Association.

Today, the tax is assessed on one per cent of the first $200,000 and two per cent thereafter.

“I hope they’ll readjust,” she said of the B.C. Liberal government.

“Any savings we can give buyers will be huge.” 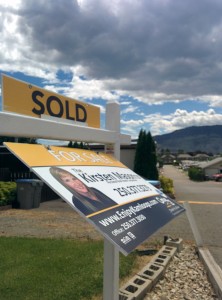 CFJC News Kamloops posted this article and news story on October 1st, 2015. The story is by Tanya Cronin.

September was a strong month for the local real estate market in Kamloops, with sales up 34-percent. A total of 248 residential properties changed hands last month – up from 183 in September of 2014. The local market is the most balanced it’s been in years – and with mortgage rates at a low, the Kamloops and District Real Estate Association President says, it’s great news for both buyers and sellers. Right now, the average sale price in the City is 386-thousand dollars.

As a team we have found that it has been very busy both with Buyers and Sellers. We sold 24 homes in September alone so it definitely was a busy month. With lower mortgage interest rates Buyers are excited and eager since they have lower financing costs. Homes under the $500,000 mark seem to sell well in Kamloops however homes over that price point are a bit challenging. The sales are also stronger in some areas of Kamloops more than others. It isn’t consistent across the board. The more expensive real estate in Kamloops takes time to sell and needs effective marketing to stand above the competition.

This article appeared in the Infotel (Kamloops InfoNews.ca) on June 2nd, 2015 and was written by Dana Reynolds.

KAMLOOPS – With more houses being built and home-buyers spending more the Kamloops housing market is off to a very good start in 2015.

According to Canadian Mortgage and Housing Corporation single-unit housing starts in Kamloops ‘surged’ in the first three months of 2015. The report from the corporation shows every category of housing start grew during the first quarter, with the exception of rental apartments. The first quarter of 2015 saw just one rental unit built, compared to 88 in 2014.

The corporation notes there is a provincial trend towards multi-family dwellings and the trend is seen in Kamloops as well, where the number of starts on semi-detached homes tripled. Single-family homes almost doubled as well though, growing to 33 in the first quarter of 2015 from 19 during the same period in 2014.

The number of completions during the first quarter were up 76 per cent as well, with 92 more homes finished in quarter one of 2015 than in 2014.