This article was written by the Canadian Real Estate Association (CREA) on May 9, 2011.

The Canadian Real Estate Association (CREA) has revised its forecast for home sales activity via the Multiple Listing Service® (MLS®) Systems of Canadian real estate Boards and Associations for 2011 and 2012. 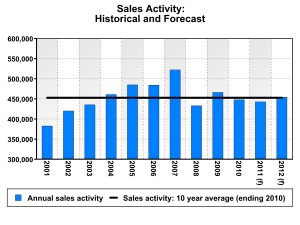 National sales activity is now expected to reach 441,100 units in 2011, a decline of 1.3 per cent from 2010. This is a slight improvement from the 1.6 per cent decline forecast by CREA in February, due to stronger than expected activity in British Columbia in the first quarter of 2011.

“Home buyers expect mortgage interest rates to rise and are mindful of their current and future debt levels. They’re doing their homework to better understand how their mortgage payments and family budget might change down the road before they make an offer,” said Gary Morse, CREA President. “That said, even though mortgage rates have increased recently, they remain very attractive and are keeping financing within reach for many homebuyers,” added Morse. “Some housing markets are hotter than others, so buyers and sellers would do well to consult their local REALTOR® to understand how supply, demand and prices are evolving in their housing market.”

In 2012, CREA forecasts that national sales activity will rebound by 2.6 per cent to 452,500 units. This is little changed from the previous forecast, and stands roughly on par with the ten year average for annual activity.

Although sales activity in the first quarter of 2011 came in largely as expected, multi-million dollar property sales in Greater Vancouver have surged unexpectedly. These sales have upwardly skewed average sale prices for the province and nationally, prompting the average price forecast to be revised higher.

The national average home price is forecast to rise four per cent in 2011 and nine-tenths of a per cent in 2012, to $352,500 and $355,800 respectively. This marks an increase from the previous forecast, and underscores the significant effect that investment in British Columbia is and will have on national results.

“As expected, recent changes to mortgage regulations brought forward some sales activity into the first quarter that would have otherwise occurred later in the year, particularly in some of Canada’s more expensive housing markets,” said Gregory Klump, CREA’s Chief Economist. “This is likely to result in a milder version of the volatility in sales activity that we saw last year.”

CREA expects home sales activity to regain traction after dipping in the second quarter as economic recovery and hiring continues. “While interest rates are expected to rise later this year, they will still be within short reach of current levels and remain supportive for housing market activity,” said Klump. “Continuing job growth will underpin housing demand, keeping the housing market in balance and stabilizing home prices.”

“The extent to which high priced sales activity in Vancouver will pitch up the average price locally, for British Columbia and nationally will likely diminish in the next couple of months in line with a seasonal increase in national activity,” Klump added. “That said, foreign investment in Vancouver residential real estate is showing no signs of slowing, so it seems likely to remain a prominent market feature for some time.”