Above Average December for Kamloops and District Home Sales, KADREA

The number of homes sold through the MLS® System of the Kamloops and District Real Estate Association came in slightly below levels from a year earlier in December 2014.

According to the Association’s statistics home sales totaled 123 units in December 2014, down just 2.4 per cent (three sales) from December 2013.

“December’s sales figure came in slightly below the same month in 2013, but looking back over a bit more history it came above both the five and 10-year averages for the month,” said Ingrid Pfeiffer, President of the Kamloops and District Real Estate Association. “A total of 2,260 homes traded hands in 2014, slightly above but broadly in line with the average of the last five years. The average price of all those home sales was just over $318,000, up almost two per cent from 2013.”

The dollar value of all home sales in December 2014 was $39.3 million, a decline of less than half of one per cent on a year-over-year basis.

There were 195 new listings on the Association’s MLS® System in December 2014, up 29.1 per cent on a year-over-year basis. This mostly reflected a drop in new supply in December last year.

Active residential listings on the Association’s MLS® System numbered 1,569 units at the end of December, up seven per cent from a year earlier. 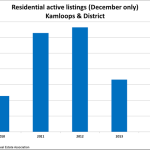 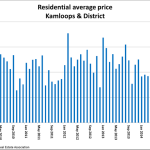 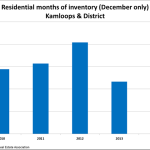 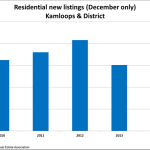 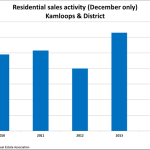