Tranquille On The Lake Project Growing

This article appeared on Kamloops This Week on May 1st, 2012 and was written by Andrea Klassen. 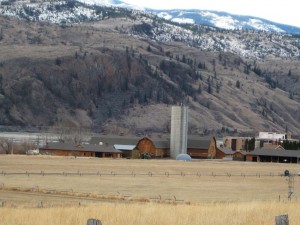 A housing project slated for the historic tuberculosis-sanatorium lands on Tranquille Road is beginning to bear fruit.

While the village-style development is still years away from construction, the organic farm that anchors the project is up and running.

Starting Saturday, May 26, the Tranquille Farm’s produce will go on sale in a new farmers’ market space that will run on weekends to the end of summer.

The neighbourhood plan for the Tranquille on the Lake development will also head to city council this month.

“This sets the vision for the next 30 or 40 years, so, it’s really a key issue,” said development manager Tim McLeod.

“Once this is behind there, then zoning will take place. Then we’ll do a phased development agreement, then start to build.”

The updated plan was on display on April 26 at a downtown open house McLeod said was meant to give council and the public an opportunity to see where the plan is at now.

Tranquille on the Lake could include up to 2,000 residential units, which would include apartment, townhome and single-family dwellings and seasonal houses.

While past plans for the site included an 18-hole golf course, McLeod said it was written out of the latest draft to save more space for the organic farm and orchard that will cover about 60 per cent of the 191-hectare property.

“There’s a huge groundswell of people looking for good-quality food,” he said.

“They’re really concerned about it and they want to live where that food is.”

A marina planned for the village has also become a “working waterfront,” which McLeod said could include boat-repair and fishing shops.

“So, on a Saturday morning, you take your latte and you can go along the beachfront and enjoy it.”

If council finds favour with the development, McLeod estimated it will take about a year to get through the regulatory process and two more years to get the first phase of the project to the move-in stage.

On the farming side, owners B.C. Wilderness Tours are also drafting a farm plan for the province’s Agricultural Land Commission, which functions much as its neighbourhood plan does.

The company is still hoping to take a portion of its property out of the Agricultural Land Reserve and replace it with non-ALR lands McLeod said are better-suited to farming.

In addition to granting approval for the farmers’ market, the commission has already agreed to an on-site RV park.

The full neighbourhood plan is available at tranquille.ca.

Click here to read more information about the area.