Still No Takers for Tobiano Resort

This article appeared in the Kamloops This Week on November 24th, 2011 and was written by Jeremy Deutsch. 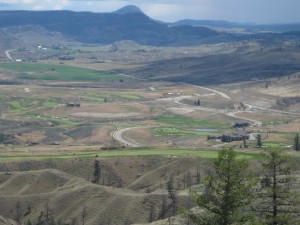 It’s been nearly five months since Tobiano resort went into receivership, but there are still no takers for the financially struggling development.

The resort was put on the market in September, with a deadline for offers by the end of that month, but there were no significant bids.

Douglas Chivers, a representative with the Bowra Group, which was appointed receiver of Tobiano by the court, said despite the lack of interest, the resort will continue to run business as usual.

“We intend to continue to develop the resort and sell off the lots and the other properties and see what interest can be generated,” he said, adding the award-winning golf course will be open next season.

Chivers said it isn’t a surprise interest in the resort has been minimal given the current real-estate market, noting several other troubled developments in Interior have also received little attention from buyers.

In August, a representative with the Jim Pattison Group, which owns a 13-acre parcel of land within Tobiano, where it hopes to one day build townhomes, told KTW it’s unlikely such a project will get started any time soon.

Since the summer, the receiver has managed to sell five lots at Tobiano and continues work on trying to get some form of a marina in place.

Chivers said the Bowra Group has no intention to stop marketing Tobiano, but said getting some type of building activity at the resort is key to a sale.

“The more activity up there, the more people come to it, the more attractive it is,” he said.