This is the latest report released by the BC Real Estate Association. Click on the images to enlarge. The link to the full PDF is at the bottom of this page. 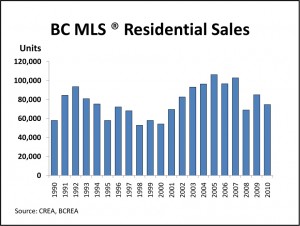 “Tighter credit conditions and expended pent-up demand curbed home sales during the first half of 2010,” said Cameron Muir, BCREA Chief Economist. “However, low mortgage interest rates and improved economic conditions buoyed home sales in the latter half of the year.” MLS® residential unit sales declined 40 per cent January through July before climbing 43 per cent by the end of the year, on a seasonally adjusted basis.

“The inventory of homes for sale peaked at 53,375 units in May before declining 14 per cent to 46,000 units by December,” added Muir. “The combination of fewer active listings and increased consumer demand has improved market conditions in many areas.” MLS® residential sales declined 25 per cent to 4,258 units in December from a near record level of 5,703 units in December 2009. After a 15 per cent increase in unit sales between October and November, a further 1 per cent increase was recorded in December on a seasonally adjusted basis. The average MLS® residential sales price was a record $523,990 in December, up 6 per cent from December 2009. 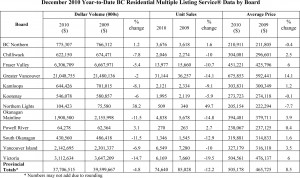 2010 Year To Date BC Residential MLS