This article appeared in the Kamloops This Week on November 17th, 2011 and was written by Jeremy Deutsch. 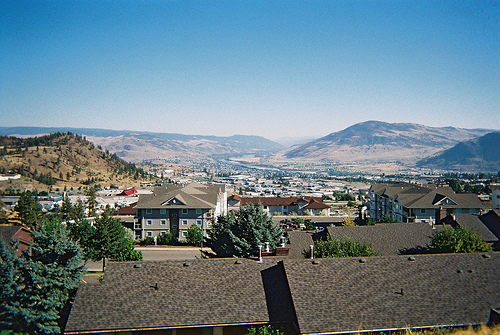 A little piece of Scotland will soon be coming to the Tournament Capital.

City council has unanimously approved a set of rezoning applications for a large residential development at the end of Bentall Drive in upper Aberdeen.

The developer, DA Taylor Holdings, is planning to turn a 34-hectare parcel of land into a 500- to 800-single and multi-family-unit development centred around a mixed-use commercial Scottish-themed neighbourhood village called Edinburgh Heights.

Though some residents at the public hearing on Tuesday night (Nov. 15) expressed concerns over traffic, parking and the types of commercial businesses being considered, council appeared enthusiastic about the project.

Mayor Peter Milobar said the development is much more comprehensive then what was first proposed a few years ago, adding concerns around traffic will be alleviated.

He said the development will be unique and offer a different product to the housing market in Kamloops.

“A bit of variety is always a good thing in the marketplace,” Milobar said.

Coun. Pat Wallace said she liked the densification of the project and the opportunity to have a “European mini-city” within Kamloops.

She is also confident the developer will resolve the traffic and parking issues to most residents’ satisfaction.

Jeremy Cooke, project director with DA Taylor Holdings, said the next step is to finish road work at the east end of Bentall Drive, which could begin in spring 2012, and complete the master plan for the property.

He noted the entire project could take 10 to 15 years to complete.

Cooke said the intention is to build a people-oriented community that not only has good looking buildings, but is also functional.

“It’s turning it into a village where people can actually live day-to-day,” he said.

“Kamloops needs something like this right now — a walking, living community.”

The developer had worked with the city for more than a year to have the project comply with Aberdeen Neighbourhood Plan.

In 2007, DA Taylor Holdings announced plans to develop a 400-acre parcel of land into Edinburgh Heights, which would resemble a village in the Scottish countryside.

Council of the day was cool to the plan, in part due to concerns the project didn’t have enough high-density units.

The new plan adds more density to the development on the eastern benches of Bentall Drive, while scrapping what would have been two-acre parcels of land.